Subproject A02
Drop/spray impact on wall films of different liquids 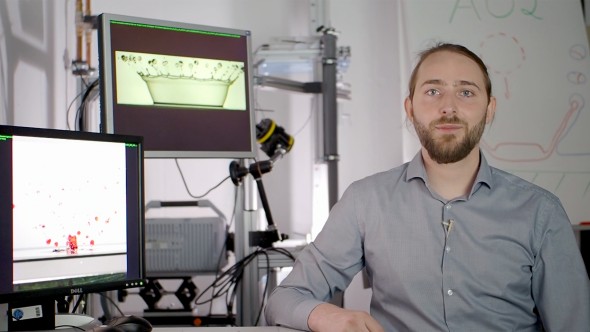 The subproject A02 addresses drop and spray – wall film interactions whereby the drop liquid and the wall film liquid are different. Those interactions are relevant for internal combustion engines as well as exhaust gas after-treatment systems. The impact of a drop on a wall film can result in generation of secondary droplets, which may contain both wall and drop liquid and can thus influence the combustion process.

In case of exhaust gas after-treatment systems (i.e SCR deNOx) drop impingement of urea-water solution on the wall leads to heat transport processes, which in combination with the fluid transport due to drop impact have an influence on the decomposition of urea and thus the NOx Emissions. Current research focuses mainly on drop impact of dry substrates or on films of the same liquid. There are studies concerning drop impact on wall films of different liquids describing the drop impact phenomenologically but the underlying physics are still not fully understood. Specifically a model that covers the physical processes during the drop impact including the heat transport and characterization of secondary droplets is missing.

The global goal of the subproject A02 is to understand the drop impact on wall films, with the result of a comprehensive physical model for application in numerical simulations. To achieve this, a broad parameter range of generic drop impact on wall films of different liquids is investigated. The obtained data is evaluated and serves as base for the model development regarding the main parameters of secondary droplets such as size, velocity, number, and composition as well as heat transport phenomena during the drop impact. Parallel to the development of a theoretical model the experimental data is used to validate numerical simulations.

A large range of parameters of drop impact has been covered by variation of drop size, film thickness, impact velocity as well as fluid combination and investigated regarding the phenomena of drop impact. In this scope a new splashing subcategory, namely “corona detachment”, has been discovered and described. Furthermore, a theoretical model to predict the temporal evolution of the Corona in cases of both, horizontal and inclined drop impact, could be developed based on the experimental data. In addition, a model for the dimensionless K* number is introduced in order to determine the splashing threshold.

The test-rig developed in the preceding funding period enables the examination of drop impact with infinitely adjustable impact angle on a film with precisely controlled film thickness. The phenomena during drop impact have been captured by shadowgraphy. The test rig is expanded by a heating mechanism to control the temperature of wall-film and drop. Heat transport phenomena and the temperature deviation in the wall film during drop impact are measured by the use of a high-speed infrared camera. Besides the thermal properties, the focus in the second funding period is on the secondary droplets emerging during splash.

Secondary droplets can be separated into two categories according to their size. While the properties of large and possibly non-spherical droplets can be obtained by image processing of high-speed recordings, smaller spherical droplets can be analyzed in size and velocity applying Time-Shift technique. In order to determine the composition of the secondary droplets, the impacting drops are dyed and recorded by a color-sensitive high-speed camera. Therefore, an evaluation method to determine the corresponding volume fractions was developed, which is to be further elaborated.

Current objectives include the extension of the experimental setup by a controllable heating of the impact substrate and the fluid tank. In addition, constructive changes are planned and realized to allow the integration of the high-speed infrared camera. Preliminary investigations are conducted, concerning the spatial development of the film thickness in order to be able to estimate the heat flux in the film and to evaluate constructive possibilities of repositioning the CHR-Sensor for film thickness measuring. Besides, the method to determine the respective volume fractions of secondary droplets (as shown in figure 2) with the help of the color sensitive high-speed camera is to be elaborated and calibrated for a larger spectrum of fluids.

Experimental data concerning the drop-wall film interaction of Isooctane and oil is provided to B08 (Marschall/Wörner) to validate numerical models and simulations. Furthermore, a model describing the splashing threshold is exchanged with C02 (Kubach/Koch). In Cooperation with A05 (Wagner) the further development of film thickness measurement (FMLAS) is supported by validation against a commercially available chromatic confocal resonance sensor (CHR).