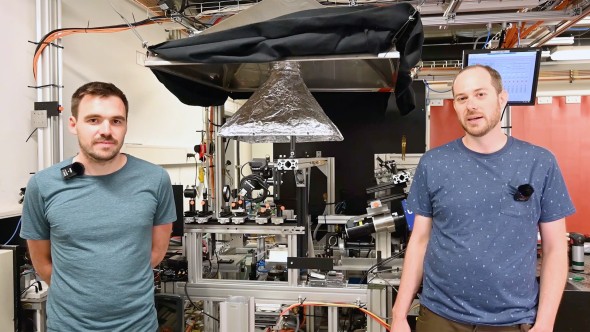 In many modern, technical combustion systems, such as piston engines or gas turbines, flame-wall interaction (FWI) and flame quenching are highly important processes. Quenching on solid surfaces results in wall heat losses, lowered device durability, soot deposits and increased emissions, like carbon monoxide or unburned hydrocarbons. This lowers the efficiency and downgrades the environmental compatibility of the overall combustion process. The recent trend of downsizing technical combustion devices further increases the relevance of flame-wall interaction, as the surface-to-volume ratio rises. Since the underlying phenomena and interdependencies are not yet fully understood, fundamental research on near-wall combustion is considered highly relevant to aid the development of future combustion concepts.

Scope of the sub-project A04 is on fundamental experimental studies of flame-wall interaction in generic test cases. The experiments are designed to access near-wall fluid mechanics and thermochemical states (i.e., chemical reaction progress) as well as their complex coupling. The main objectives are to generate a better phenomenological and process understanding of flame-wall interaction and to acquire comprehensive validation data to aid the development of modeling in numerical combustion simulations. The first funding period was focused on studies of generic, atmospheric combustion systems at simplified experimental conditions. In the second funding period, the research is focused on the side-wall quenching (SWQ) process and evolves towards close-to-reality conditions in terms of sustainable fuels and mixture inhomogeneities. Furthermore, investigations at atmospheric conditions (Figure 1a) are supplemented with studies addressing FWI in a pressurized environment at higher turbulence levels (Figure 1b).

Simultaneously acquired gas phase temperatures (T) and carbon monoxide (CO) concentration measurements at atmospheric conditions were used to analyze the reaction progress in terms of thermochemical states. These experiments revealed that the presence of the wall, i.e., the wall heat loss, impacts both the formation and oxidation of CO significantly and underlined that adiabatic, numerical flame calculations are not capable to capture this trend correctly. In a related time-scale analysis, it was figured out that especially the CO oxidation is dominated by heat transfer processes.

To gain further information on a second combustion relevant species in the current funding period, the laser diagnostic approach was recently enhanced allowing for additional carbon dioxide (CO2) concentration measurements (Figure 2a). By comparing correlations of the three simultaneously measured scalars (CO2, CO, T) to results of 2D fully-resolved chemistry and transport (FCT) simulations, the importance of differential diffusion effects for numerical modeling could be demonstrated. Furthermore, results suggested that CO2 could serve as a more robust component of a progress variable definition as it is less affected by the quenching wall. By transferring the experimental methodology to the turbulent side-wall quenching process, the impact of near-wall mixing and transport processes within turbulent FWI was assessed (Figure 2). Here, additionally measuring CO2 mole fractions did significantly aid in postulating a novel near-wall transport mechanism from experimental data (Figure 2b), which includes an exhaust gas recirculation (EGR) close to the quenching point. This finding was supported and explained by measured near-wall fluid dynamics. The proposed influence of EGR was recently confirmed by sub-project C03 . Overall, it became evident that measuring additional CO2 information during FWI significantly supports both understanding and discussion of the underlying near-wall physical phenomena. This is seen as a promising future experimental pathway to further study FWI thermochemistry.

The fundamental flame-wall interaction experiments are performed within two generic test rig configurations. The atmospheric side-wall quenching burner (Figure 1a) allows for investigations of various aspects of FWI at ambient inflow conditions. Due to its reduced complexity and good accessibility, the burner offers excellent prerequisites for the adaption of advanced laser diagnostics for near-wall measurements and the investigation of flame quenching by means of comprehensive multi-parameter studies. For experiments at conditions closer to reality, e.g., increased pressures and higher turbulence levels, a novel, pressurized side-wall quenching burner is operated (Figure 1b). This novel test rig was designed and set up within the scope of this sub-project. As its design is inspired by the atmospheric configuration, gained experiences with regards to the application of laser diagnostics are easily transferable and highly valuable considering the increased complexity of the test rig. Main boundary conditions of both test rigs can be varied, like laminar/turbulent inflow conditions, wall temperatures or fuel mixtures. The experimental conditions are well controlled and monitored during operation. This guarantees for reproducible operation. To enable optical accessibility of the laser beams below 100 micrometers close to the surface, the quenching wall of both burners features a slight curvature.

Present objectives involve process-related investigations on the impact of increased pressures on flame-wall interaction processes focusing on flame front topologies and combustion dynamics. The investigation of near-wall thermochemical states at higher pressures will be in the focus of experiments in near future and a renewable, more complex fuel, namely dimethyl carbonate (DMC), will be used. Besides, investigations on mixture inhomogeneities and near-wall partially premixing during FWI are carried out in the atmospheric side-wall quenching burner test rig. Moreover, highly resolved near-wall velocimetry data under FWI conditions is evaluated and benchmarked to common scaling laws of non-reacting turbulent boundary layer flows. First results from the above objectives demonstrate promising new insights into near-wall phenomena processes based on recent and upcoming experiments.

For an optimized design of the pressurized side-wall quenching burner, the intense cooperation with subprojects C03 and A05 was pursued. The phenomenological understanding and the experimental data is and will be used to aid the numerical simulations and modeling (C03 , B04 , B06 ), and results are published in joint research articles. For the adaption and implementation of laser-based diagnostics, an intense cooperation with C01 and A05 as well as A06 and C02 is ongoing.