Subproject B05
Modelling and numerical simulation of multiphase chemical reactions

In the video, Christian Kuntz presents project B05: Multiphase reactions. 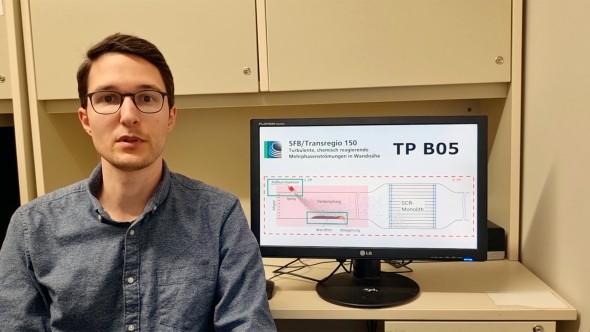 The modeling and numerical simulation of multiphase, chemical reactions in technical processes are among the greatest scientific challenges of our time. Accurate predictions of physicochemical processes in gas, liquid and solid phases can optimize operating procedures and prevent long-term damage. Thus, application-specific models can be a tool for increased efficiency and sustainability of technical processes. Especially in the field of combustion and emission control, multiphase flows including chemical reactions in and between the individual phases are dominant processes that are poorly understood.

After the successful investigation of chemical and physical processes between the dosing point of the urea-water solution in the exhaust tract and the catalyst in FP1, the downstream catalyst was included in FP2. For this purpose, suitable models and algorithms had to be developed to describe the fluxes on the catalyst and the resulting changes in the kinetics of the multiphase (gas-liquid-solid) reactions. By integrating the models into suitable computer programs, the experiments performed in C04 should be simulated and, based on the mechanism from FP1, new multiphase reaction mechanisms for the catalytic and non-catalytic decomposition of urea and its downstream products should be developed. The influence of the SpaciPro measurement technique, which measures concentration and temperature along a catalyst channel through a thin capillary, on the measurement results should be evaluated by CFD simulations. Another task was the creation of reaction kinetic submodels for the reduction of the mechanisms (B07) and the integration into CFD codes (C05), in order to finally be able to simulate the entire process of the preparation of the urea-water solution from the dosing point to the exit from the catalyst.

The focus of this subproject is the exhaust gas aftertreatment of internal combustion engines, in particular the reduction of nitrogen oxides with selective catalytic reduction. Therefore, algorithms and models were developed for the numerical simulation of the chemical reacting multiphase system for preparation of the reducing agent ammonia from urea-water solution (AdBlue) and the interaction with walls upstream of and in the SCR catalyst. First, the existing mechanism of non-catalytic urea decomposition and by-product formation was extended by a mechanism for the high-temperature by-products to cover the whole relevant temperature range up to 750°C as can be seen in Figure 1. In a second step the interaction of urea by-products with SCR catalyst was investigated and an additional catalytic reaction mechanism was developed. In general, it can be seen that the decomposition of many by-products and urea itself is accelerated by the presence of a SCR catalyst. In particular, instead of a pure sublimation of cyanuric acid, a decomposition into isocyanic acid also takes place. In addition, a clearly increased decomposition of the high-temperature deposits ammelide, ammeline and melem has been discovered. With the mechanism now completed, the whole process from the injection of urea-water-solution into the exhaust pipe, over the reactions upstream of and in the catalyst to the outflow can be described and simulated.

After successful development of models and mechanism for the decomposition of urea and its by-products, the focus in the remaining time of the current funding period is the comparison of experiments from C04 and simulations, including their optimisation. For comparing the experiments and simulations the platform CaRMeN is used. Furthermore, a new mechanism for the catalytic hydrolysis of isocyanic acid on a SCR catalyst will be developed to complete the used surface mechanisms.

This subproject makes an important contribution to the modeling of multiphase flows and reactions in the Collaborative Research Centre. On the basis of the basic chemical investigations from B04, new reactions mechanisms and models are developed to simulate the physicochemical processes in SCR systems. These models are reduced and tested with strong cooperations with B07, before the submodels are forwarded to C05 for CFD simulations of the whole process. By sharing chemical, physical and thermodynamic data, subproject B08N performed detailed DNS simulations of the drop impact of urea-water solution on different surfaces.